The leading children's brain tumour charity in the East of England, since 2006. 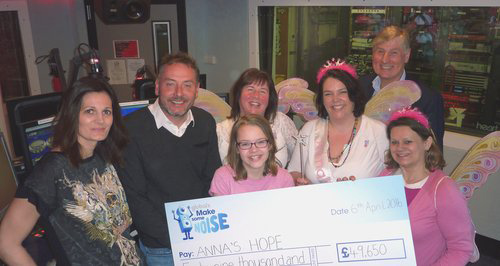 Heart Cambridgeshire's Kev and Ros presented Anna's Hope with a huge cash sum, to support their work with children who have brain tumours.

Over the past year, we’ve raised thousands of pounds for our charity, Global’s Make Some Noise, which aims to give a voice to smaller charities, supporting young people, around the UK.

The charity supports children in the East of England diagnosed with a brain tumour by providing specialist neuro-rehabilitation support through the Anna’s Hope Therapy Team, which is part of a pioneering new service called Brainbow at Addendrooke’s Hospital.

Brain tumours are the biggest cancer killer of children in the UK, and for those who survive, their lives can be severely compromised.

Watch the moment we told Carole and Rob Hughes, the founders of Anna's Hope, how much money we had raised.

We'd like to say a massive thanks to YOU for getting involved and helping us to fundraise £49,650 for the charity.

This grant will pay for the Anna’s Hope Occupational Therapist for a whole year.